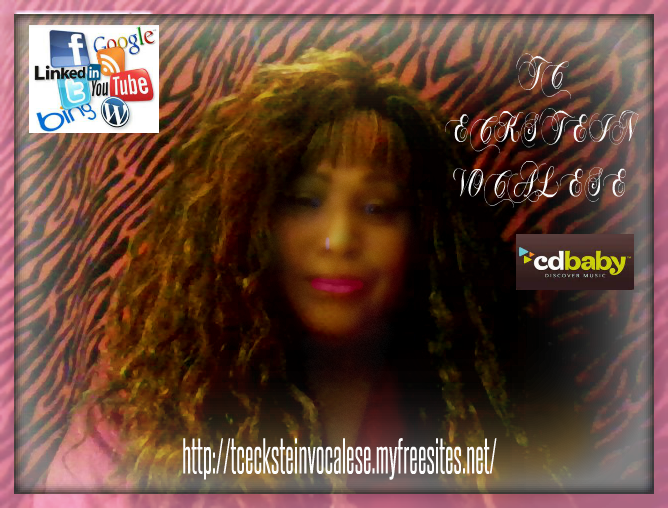 http://tcecksteinvocalese.myfreesites.net/BE SURE AND CHECK OUT THE WEBSITE WITH LINKS CONNECTED TO NLISTIC SOULDIERS LISTINGS ETC...CONTACT US TO BE ON THIS NEXT SEASON…

Exposed Vocals: So tell us your story. Where did you grow up? What made you decide to become an artist?

L3v3L Three: I grew up in the Fifth Ward area of Houston Texas know as (The Nickle). Music has always been a part of my family and family history. I listened to the area musicians play guitars, and sing the blues and i watched and learned every movement on the guitar and just loved this thing we call music.

Exposed Vocals: How did you come up with…

Music Review and Interview with L3v3l Three – A Mother’s Love

Music Review and Interview with L3v3l Three – A Mother’s Love

The guitar work on A Mother’s Love is beautiful, a really gentle but stylish expression of emotion through the skillful playing. The melody and the softness of the voices really helps highlight the warmth and the whole concept of a mother’s love. The track has a really mellow and easy to listen to vibe to it, the softness of what sounds like a horn section, again adds to the effect. Everything works well together to keep…

Our boy dj iceman does it again with another launch. this time is a blog. "The website was a temporary placeholder till i could get this blog up and running" Its something ive wanted to do for a while,now its coming to fruition" the blog is a mix of old school and new school hip-hop videos and songs,and is the main focal point for Big Boss Ent's promotional/placement…

Exile375 CD release concert on June 16,2016 at the Star Bar in Chicago Ridge, Illinois. Tickets on sale at aftonshows.com/Exile375
Check me out on Reverbnation.com/Exile375

I want to SHOUT OUT! POZE PRODUCTIONS/POZE RECORDS ARTIST TONE HARRIS! Enjoyed meeting you and talking to you at the AKADEMIA AWARDS!

Who Is Crimson Tgs?? Unlike most artists in their field, whose aim is to get rich and quickly rise to the top, they have a different goal. One we can all relate too and surely want…
Continue

GREAT NEWS!!! ....SIMPLY T IS ONE OF 8 TO BE NOMINATED AS THE BEST R&B FEMALE FOR A GA MUSIC AWARD!!! PLEASE HELP ME BRING THAT AWARD HOME BY GOING TO THE LINK BELOW TO VOTE FOR ME!!! THANKS SO MUCH FOR YOUR SUPPORT AND TO THOSE WHO TOOK THE TIME TO NOMINATE ME, I AM SOOOO GRATEFUL!!!
http://awardshownow.com/gamusicawards/

Hello POZE FAMILY in an effort to continue to grow and to be ever evolving into a Band as well as a BRAND we have launched a more diverse and professional website please stop by and visit us at www.l3v3lthreemocity.com much love and continued success to all of my POZE family, friends, artist, and everyone whom supports and love L3v3L Three!

Christopher B WITH SERIES TWO RECORDS INVITES L3V3L THREE TO PERFORM WITH ARTIST DIGISAURUS on July 19th or July 27th in Houston.

A Thousand Tears
by L3v3L Three

L3v3l Three is well known for their music and here they
don't disappoint. The band gives a haunting and deep vocal
performance here over their signature sound. This is one of those songs where if you're feeling reflective or melancholy this will fit your mood.

#1 for Funk in United States, Texas

#9 for Funk in United States

#2 for Old School in United States

#3 for Instrumental in United States, Texas

#17 for Instrumental in United States

#35 for All Genres in United States, Texas

#3 on the local Reverbnation chart

Tone Harris is currently ranked #3 on the local Reverbnation chat. #9 on the regional charts. Thank everyone that is getting the word out and I hope we keep this momentum going.

GOD is making a way for me to bless his Kingdom

I can't believe where God has placed me today!  It feels so good to have worth in His eyes after being told for half your life you have none.  Being told that if it weren't for that spouse or significant other that you are nothing and never will be without them.  Well I tell you today if anyone is in that situation you need to rebuke it in the name of Jesus.  Your worth in the kingdom is more than a human can measure.  So do not let man put an appraisal on your worthiness.

Fresh off his return from Austin after performing at several SXSW showcases, Chicago rapper PVM drops his latest single “Drugs.”…

Vi City Is Making New Waves WIth His Debut Single “OnGOD” As He Releases His New Track “Lenciaga” Get In Tune!Chicago native Vi City has been on a crazy wave all 2021! He returns with his brand new single “Lenciaga” a hot new joint for the summer.  OnGOD featuring and produced by Harv has spiked and is reaching new platforms and gaining new…See More
8 hours ago
0 Comments 0 Favorites

D-Moss is a Artist/Producer/Audio Engineer signed by independent record label Dope Music South Music Group. Born in Chesapeake, Virginia, D-Moss, spent most of his youth in the small county of Currituck, North Carolina. As a child he was exposed to…See More
8 hours ago
0 Comments 0 Favorites